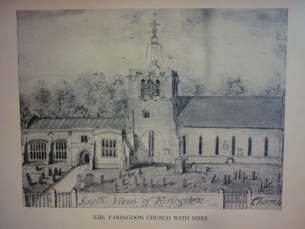 Sketch of All Saints' Church with spire
Faringdon has a long and varied history with evidence of habitation by Prehistoric man, Romans and Saxons, Normans and Vikings.
It ranked the 3rd town of importance in the Saxon Kingdom of Wessex. Faringdon is derived from Ferendune- the fern covered hill- and recorded in the Domesday survey of 1086.

In the 1780s stage coaches were used for delivery of the post and by 1840 came through Faringdon twice daily. Gummed envelopes were invented in Faringdon in the mid 19th century.

Faringdon was prominent in the Civil War, with Charles I staying in Oxford. Faringdon was one of the last places in England to hold out for the King. Oliver Cromwell briefly occupied the town in 1645, attacking unsuccessfully the Royalist garrison defending the church and Faringdon House.

The seige of Faringdon House started  in April 1645. By the end of the Civil War Faringdon was ruined (Parliament judged that Faringdon and Torrington in Devon were the two worst war- damaged towns in England) and did not recover until the  coaching age.
Until boundary changes in the 1970s Faringdon was in Berkshire.