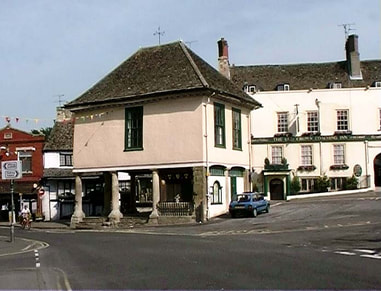 ​Old Town Hall (Market Hall)
​Built in the 17C, it was a hive of activity on market days when farmers’ wives would sell their surplus eggs, butter and cheeses under the shelter of the meeting room above.
At one time there must have been a room under the roof, as well as the main meeting room. Old pictures show a dormer window looking towards the saddlers.
The iron hoop on the pillar is supposed to be where wrong doers were tied to be whipped, commonly called ‘the whipping post’, adjacent to this were the stocks.

The first town jail was a tiny room in one corner with a very small, high window as a peep hole in the door. It has been written that if your friend was incarcerated inside and you wished to give him some ale, you placed the stem of your clay pipe through the peep hole, placed the pipe bowl in the ale and inmate then could suck the ale through the pipe! More information 1890s
Later a larger brick lockup was built adjoining the Hall to the west, this in turn went out of use in the 1880s when a proper Police Station was built on the eastern edge of the town which had 2 single cells. The lock-up was then taken over as a store for the barrow, brush and shovel of the town road sweeper, the building was eventually removed in the 1900s.

The town’s first fire fighting appliance, the parish pump as it was called was housed under the Market Hall, and the bell to summon the crew was erected over the ridge of the roof.

The town ambulance was also garaged here for a time, after the Cottage Hospital was opened in the 1890s.
The ambulance was the church bier, not very encouraging to be taken to hospital on the same set of wheels that was used to take bodies from the hospital morgue to the church and the graveside!

When Lord Berners purchased Faringdon House and the estate, he became Lord of the Manor. The Market Hall at that time, with most of the Market Place, went with manorial rights.
However Lord Berners declined to buy the Hall as it needed a lot of repairs, so the seller gave the building to the town as a home for the war memorial to the fallen of the First World war. (and later WWII). See some history of the war memorial 1919.

​During the Second World war, officers were billeted in the meeting room. They only had a small tortoise stove for heating and it was said that more heat came off the chimney than the stove.

A George III framed coat of arms was fixed between the two eastern windows until the Hall was given to the town. No one knows where it disappeared to!

The Hall once housed the Faringdon library, and after a period of unuse has been restored to become a meeting room again.
More information 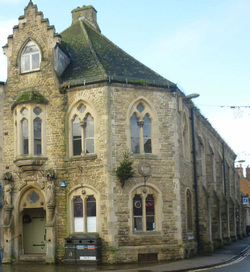 Corn Exchange
This Victorian, stone fronted building is Grade 2* listed and stands on the site of the Green Dragon [heraldic monster of Wessex]  Coaching Inn. The Savings Bank at the mews end was built in 1853 at a cost of £1,400 and formerly housed the Town Council Offices and Faringdon Community and Tourist Information Centre.

The hall itself was built as a Corn Exchange where local farmers congregated to sell their surplus grain to millers and dealers away from the noise of the animals in the main market place. It cost £2,331 1s 10d, inclusive of the site purchase of £550, and opened for business on December 29th 1863. The original roof lines are of natural Cotswold slats or tiles each with its own Cotswold name; in ascending order from the roof plate to the ridge tile they are: Long Wyvetts, Short Batchelors, Middle Becks and Muffeties.
The ten plaques inside show rural activities, [including a railway locomotive contemporary with the opening of the Great Western Railway terminal and the corbels different fruit and flowers.
From 8th to 15th March 1955 the floor was re-laid by one man using 8,183 strips of hard wearing Muhuhu wood from East Africa using a ‘secret nailing’ technique that required 8,500 1½ inch (40 mm) nails. (The Muhuhu tree is small and can only provide planks of about 1,200 x 60 mm (four foot by 2½ inch) in size.)

The Faringdon Corn Exchange Company went into liquidation in 1936 and Faringdon Parish Council bought the whole building for £1,000. It was subsequently sold to the Vale of White Horse District Council and was under threat of closure and sale. It was  bought back by Faringdon Town Council for £1 in April 2010.
​From 1919 to 1935 it was home to the Rialto Cinema until the Regent cinema was built opposite.  Entry was 2d, or 6d if you sat in the auctioneer’s gallery, known as cuddly corner.
The old hire sacks stored there were a home for rats, which would venture out during a performance.
The Regent Cinema was re-established in 2011 and shows one matinee film and one blockbuster each month.
​More information on the Faringdon History Society website

The Pump House
An early 19th century building, originally called the Pump House from the spring which rises in the cellar and supplied the Port Well.
This was Faringdon’s first bank, the County of Gloucester Bank (you can see four paler squares from where the letters B-A-N-K were erased).
It then became the offices of the Eagle Brewery,
​
​In 1914 it was a hospital See Pump House Hospital

It became the Institute and Services Club (1950s and 1960s). Later use was a Community Centre.  After this period it fell into disrepair but was refurbished c 2006 at a cost of over £500k.

​Since 2016 it has housed the Town Council Offices, with the Faringdon Community and Tourist Information Centre on the ground floor and meeting rooms on the upper floors.
At the rear there is a theatre which now houses the Pump House Project, a community facility providing many activities for adults and children.

The building is on lease from Lord Faringdon, Buscot Park. 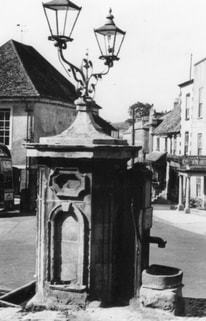 Given to the town by Sir Henry Unton, Lord of the Manor in the 16th Century, it was the town’s only piped water supply and fed an animal trough. A heavy lead cup, securely chained, was for the use of passers-by.
The gas lamps were placed on top in the 19th century.

The stone bench portrays the events of a hot summer’s day in 1936 when Salvador Dali, the surrealist Spanish artist, dressed in a full deep sea diver’s suit trudged, sweating, through the Market Place as the result of a dare by Lord Berners. Dali was due to open the first Surrealist Art Exhibition in London and Berners and Dali had thought it a wheeze if Dali were to open the exhibition dressed as diver. Dali had already nearly drowned when they were experimenting with the suit in the lake at Faringdon House; at the exhibition itself Dali had to be extricated from the suit before he suffocated.

The inscription reads: “Mistrust a man who never has an occasional flash of silliness”. The diver and inscription were sculpted by Tim Shutter in 2014.  Read more about the sculpture and the bench 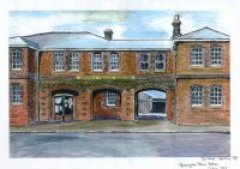 Faringdon became part of Oxfordshire in the Local Government boundary reorganisation of 1974. The Police moved to the new station in Marlborough St in the 1970s. The old police station in Coach Lane was sold and redeveloped into private residences.
More Information(pdf) 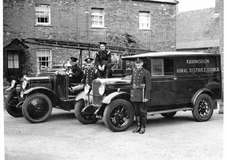 1937 Firemen, Bromsgrove
The Fire Service in Faringdon has been provided from a number of locations

It has been under the Old Town Hall, in Church St, Bromsgrove, Marlborough St and now Station Road