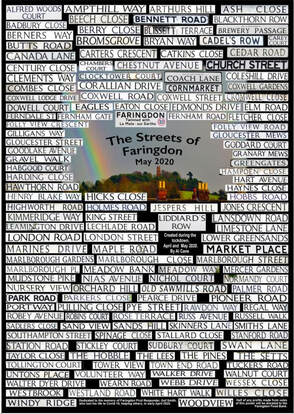 Street names poster. Al Cane
Faringdon's importance came from the crossing of two ancient ways: one from London, via Oxford and Abingdon, to Cirencester and on to Gloucester and South Wales, or to Bristol, Bath and Somerset; the other from the North of England, via Coventry and Burford, to Marlborough, Winchester and Southampton. These routes were of such importance that the main streets were named after the places that they were leading to: for example Southampton Street, London Street, Gloucester Street and Marlborough Street.

Faringdon was divided into two tithings, the boundary being the brook which now runs under the Narrows dividing the Market Place and the Corn Market. The tithing to the east of this brook was called Port and the one to the west was called Westbrook. For a long period of time deeds only referred to these two tithings and the main streets.

In 1551 the centre of Faringdon was referred to as Highe Strete als Chepe Strete. Later it became Market Place presumably because the market, a Charter being granted by Henry III, was held there. Part of it however was referred to as Port Well in deeds of the late 18th and early 19th centuries.

The other streets leading from the outskirts of town indicate the direction in which they are heading, such as Lechlade Road, Coxwell Road, Stanford or Wantage Road, Highworth Road, Fernham Road and Radcot Road.

Most of the names of the roads and streets of Faringdon fall into four main categories: Location; Commemorative - of people, family, businesses; a Combination of the two; The Natural World