The work of art was unveiled on 27th September 2014, to entertainment from Circus skills, bubbles, music, children's activities and fancy dress on an underwater theme.
The Berners Big Bench Bash, organised by the Pink Pigeons and the Town Team,  was Brilliantly Bonkers !
If you missed it - here's a few videos that capture some of the more memorable moments:
Unveiling the new statue: https://www.youtube.com/watch?v=UQD7Jy4MWvY
A Song for Faringdon: A Town Beneath the Sea.

In 2014 the stone seat near the Portwell Pump in Faringdon's Market Square was cleaned, repaired and improved with money from Bloor Homes Folly Park View development.

The Pink Pigeons group (Bringing the spirit of Lord Berners back to life) with others from Faringdon ( Town Council, Vale of White Horse council arts officer, Bloor Homes, Faringdon Art Society) invited artists, local and from further afield, to respond to the brief. The artists were shortlisted and invited to present more detailed proposals. From this Tim Shutter, London was chosen. 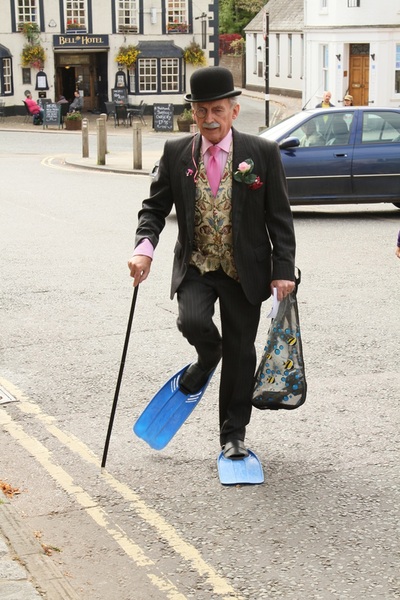 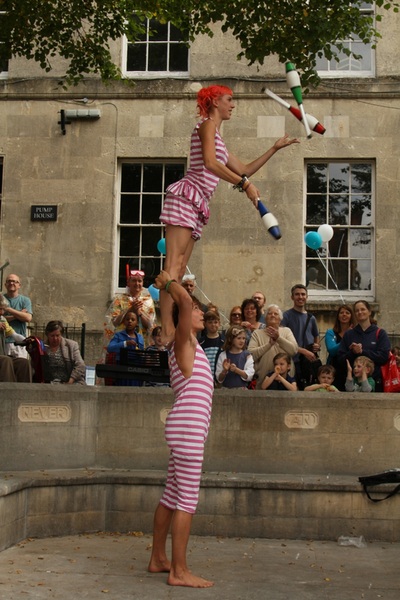 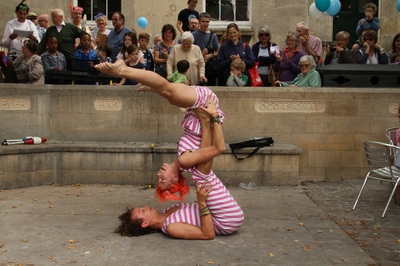 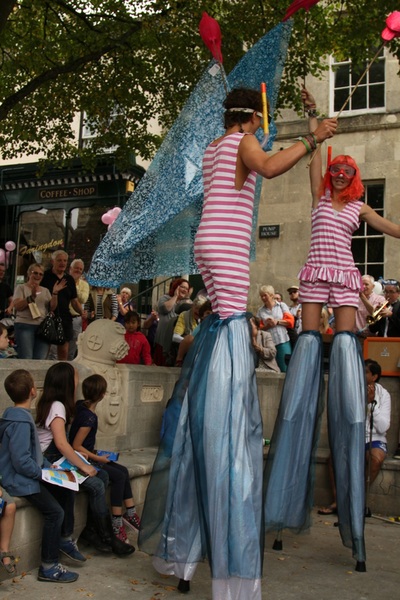 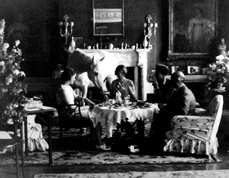 Moti , the horse, at tea
The “Dali Diver” celebrates an era when the glitterati of the art, music and literature worlds would descend on Faringdon in their droves. Diana Churchill ran around the grounds of Faringdon House naked. Salvador Dali even had his own bedroom there – painted deep red. On one of Dali’s extended visits, Berners entered into the spirit of Dali’s endeavours by making the arrangements to hire a deep sea diver’s suit that Dali was going to wear at the opening of the first exhibition of Surrealist Art in London. On being asked to what depth Dali wished to descend, Lord Berners replied that Dali was going to descend to the subconscious, after which he would immediately come up again. With equal seriousness the voice on the telephone replied that in this case they would replace the helmet with a special one.

Dali also tried out the suit in Faringdon, walking across the square right by the site of the Portwell seat. The opening itself when Dali attempted to give a lecture while slowly suffocating encased in the diving suit has gone down in the infamous annals of art history.

The Diver is also particularly appropriate in a region famed for its fossil sponges that thrived when Faringdon was deep beneath the sea. Faringdon of course also has it’s own fully registered lighthouse.

Just as Dali wore the diver’s suit to startle people from their complacency, Berners was also fond of wearing masks to give people a shock, so the weight hanging below the diver’s shoulder plates is fashioned into a laughing mask. The sad mask on the diver’s back represents the duality of Berners’ bouts of depression contrasting with his eccentric humour. 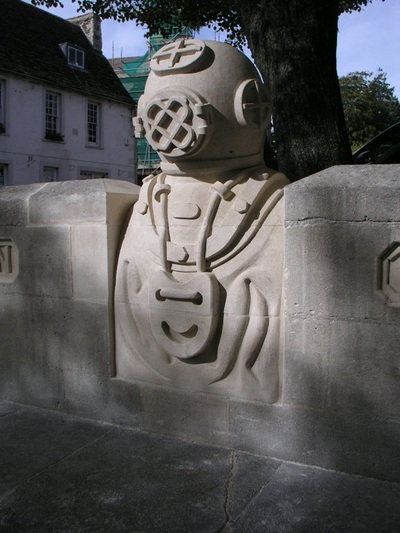 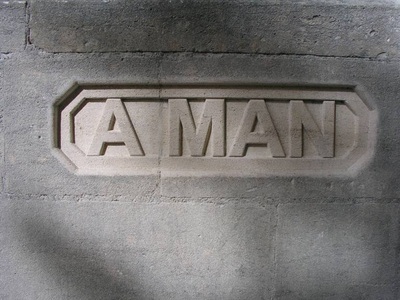 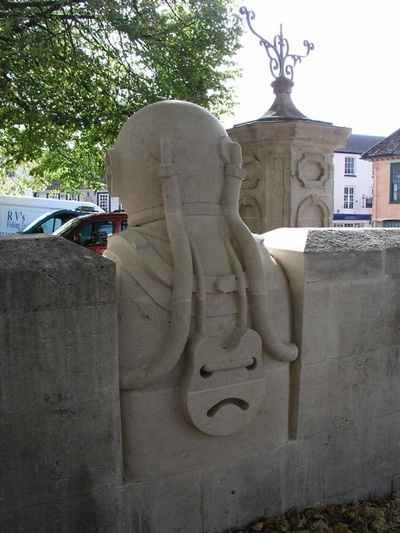 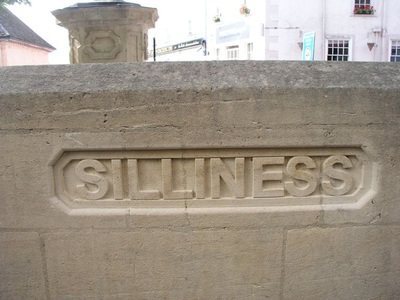 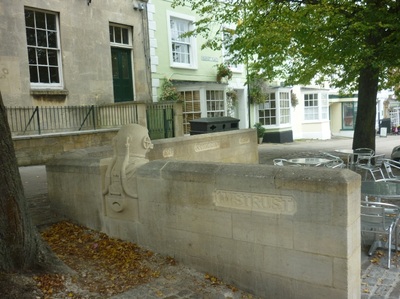 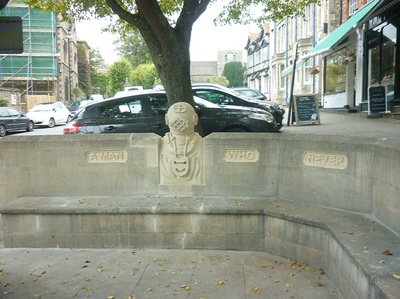 a man who never has 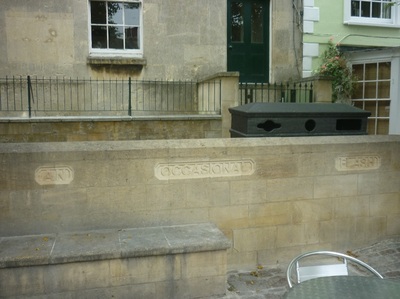 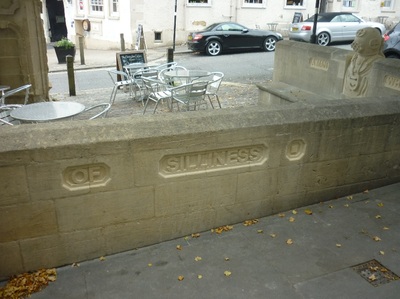 of silliness
The sculpture is accompanied by a quote from Berners,
‘Mistrust a man who never has an occasional flash of silliness’.
These words are set into sunken panels, like those of the decorative mouldings on the Portwell pump, and positioned on the front and back of the existing seat. They have been carved as though the words are stamped into soft putty rather than incised into hard stone, a bit of silliness similar to surreal melting watches. By the deliberate spacing of the incised words, the quote is designed to be misread. Just as Berners enjoyed a silly joke, (he once ran down the drive after a departing guest shouting ‘I must show you my cock’ (brandishing a ceramic cockerel), so the quote from the front reads ‘a man who never has an occasional flash’; most appropriate for a deep sea diver! Whereas from the back it reads ‘of silliness. Mistrust’, a conventional viewpoint that is contradicted when the punctuation is taken into consideration and the sentence is read in the right order.
This again reflects Berners complex character, a confused mixture of establishment values and unconventional frivolity. 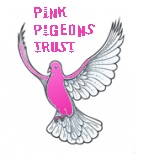 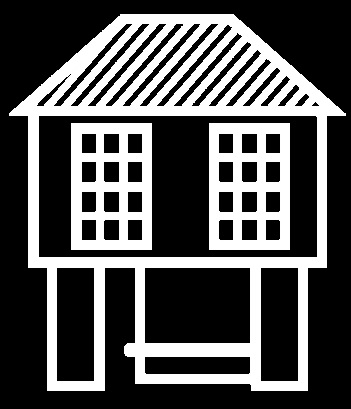 Faringdon Town Council
The age of the Portwell seating
It was built in 1986; the architect was Hugh Creighton of Stanford in the Vale ( who died in the 90s) ; and the stone mason was Jack Fox - still very much alive. Jack
lives down the Lechlade Rd . He worked for Russell Spinage at the time. The seating was paid for by English Heritage, ( "they had some spare money they
wanted to give us" - according to Jack ) and the prime mover (Jack remembers ) was Councillor Cecil Blisset .
The Cotswold stone came from a small quarry between Stow on the Wold & Lower Slaughter; and the stone supplied was originally too soft. "That won't last 20 years -
I told them" . So - Jack went to the quarry himself, and picked out harder, longer wearing stone. Jack also remembers that the paving was changed in the nineties. "
I laid it on a slope, in keeping with the rest of the slope of the marketplace. But then someone came along and relaid the paving stones so that they were flat - so that
they could put tables and chairs there" . Anyway - we can be quite sure that neither Cromwell nor Dali sat on the seating.
Sjoerd Vogt