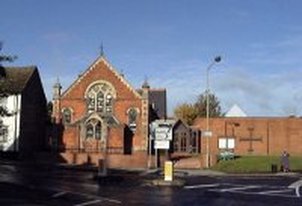 The Primitive Methodists began to mission the Ashbury and Bishopstone area in 1829, but it was not until April 1832 that they reached Faringdon.

Thomas Russell, a travelling preacher, started his Lambourn home and arrived in Wantage about 9 am. He sang a hymn, prayed and commenced to preach, whereupon he was set on by ruffians, his clothing dirtied and torn and his body badly bruised. Washing his clothes in the local brook, he put them on wet and walked to Faringdon. Here he received similar treatment, again needed to rinse his clothing and undaunted he walked to Shrivenham. Once more he suffered at the hands of the mob and preaching a fourth time on his way back, he was beaten again and his lip cut. He arrived back at Lambourn after being afoot for 18 hours and walking 35 miles.

Such preachers seemed to thrive on opposition, and again he came to Faringdon – this time on a weekday morning. By such faithful witness he won through, and some time before 1837 a Primitive Methodist Society was formed.

Many of the early meetings were held in the open air, or in a cottage, but soon the Society hired a round-house (a pigeon house), possibly in Block Green. A Mr W Taylor offered the use of his house, and for some years the Society met there.

In 1851 the Society took over cottages in Coxwell St and erected a chapel in their place. This became an electrical shop and is now residential. Seating 80, it cost £215 6s 7d. The membership of 35, and attenders numbering 120 to 160, were left with a debt of £163 to clear. Four sermons were preached on the opening day, one in the Baptists church. Celebrations continued on the Monday when a service and tea were enjoyed by about 120 in the Independent Church (now Roman Catholic church). It took 34 years to clear the debt, since the membership of the Society remained small. Congregations, however, were far from small, the church often being full to capacity.

Faringdon became head of a far flung circuit reaching into four counties, with two ministers in charge (for a while, three). Though poor in material things, these people were rich in spirit, and did much to build up the Kingdom in the town.

In 1932 Methodist Union changed all Methodist Churches into simply the Methodist Church. At that time membership was 57, but attendance was falling.
In 1963 it became clear that Faringdon could not exist as a separate circuit any longer, and the churches were divided amongst larger surrounding circuits, 6 to Witney, 2 to Wantage and 3 to Swindon. It was undoubtedly a wise move, and the Faringdon Methodist church has played a full part in the life of Witney and Faringdon circuit ever since.