Brief History
​Faringdon has a long and varied history with evidence of habitation by Prehistoric man, Romans and Saxons, Normans and Vikings.  It ranked the 3rd town of importance in the Saxon Kingdom of Wessex. Faringdon is derived from Ferendune- the fern covered hill- and recorded in the Domesday survey of 1086.

​Faringdon was prominent in the Civil War, with Charles I staying in Oxford. Faringdon was one of the last places in England to hold out for the King. Oliver Cromwell briefly occupied the town in 1645, attacking unsuccessfully the Royalist garrison defending the church and Faringdon House.  The seige of Faringdon House started  in April 1645. By the end of the Civil War Faringdon was ruined (Parliament judged that Faringdon and Torrington in Devon were the two worst war- damaged towns in England) and did not recover until the  coaching age.

In the 1780s stage coaches were used for delivery of the post and by 1840 came through Faringdon twice daily. It is believed that gummed envelopes were invented in Faringdon in the mid 19th century.

​ Until boundary changes in the 1970s Faringdon was in Berkshire. 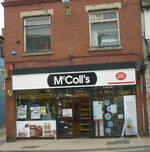 The Anns family had been ironmongers in London Street since 1824 and from the dawn of motoring had a garage for car hire and repairs across the road in what is now Perry, Bishop & Chambers. In 1911, Mr. Tinker Anns bought what is now McColls and opened Faringdon’s first purpose-built motor car showroom and garage.
There were two petrol pumps in the doorway with booms to reach across the pavement. The garage replaced a 17th century house and Joseph Newman’s blacksmith’s shop, which had been there since 1877.
​There was a forge at the rear now owned by the Old Crown Hotel; during renovation it was found to be complete with blacksmith’s tools and almost untouched since it had closed.

A late 19th Century town house built for Mr Anns’ family, Grade 2 listed.
From the 1950s it was the home of Faringdon Rural District Council until 1974 when the county boundaries were revised and the Vale of White Horse was transferred from North Berkshire to Oxfordshire.  A new District Council was formed based in Abingdon and Faringdon had a Town Council with a mayor for the first time.
More recently it was a private old people’s residential home, then a private house, a bed and breakfast establishment and is now private apartments. 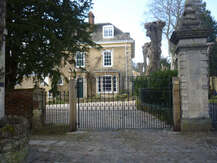 c.1720-40 rubble stone house with ashlar dressings, Grade 2 listed. It was once the dower house to Faringdon House, then the vicarage until the late 1980s. It is now a private house. 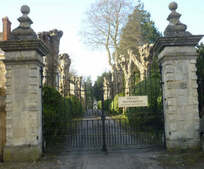 Entrance to Faringdon House (NOT open to the public) – next to All Saints’ Church.

The present Grade 1 listed house was built in 1780 by Sir Henry James Pye after the old Elizabethan Manor House, which was closer to the church, was burned down.  Pye was Poet Laureate to George III and once described as “respectable in all except his poetry”.  Steevens, a literary critic, punned on Pye’s name satirising his poetry in the nursery rhyme ‘Sing a Song of Sixpence’. 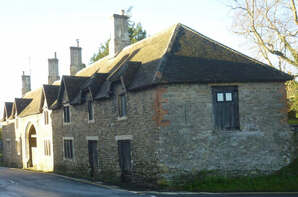 Church Street
At the end of the churchyard there are the old gatehouses belonging to the original Faringdon House, and parts of  these are timber framed with brick infill.

In the 19th century a large stone barn stood in the top corner of the churchyard.
The large stone house facing the church was the original vicarage, now converted to flats.
​There is a large old sundial at the rear. 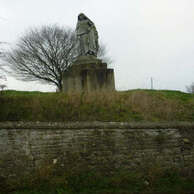 About 100 metres down the Radcot road, in the grounds of Faringdon House, is a statue reputed to be of Cleopatra.
This is one of several in Faringdon House grounds. They came from the Great Exhibition at Crystal Palace in 1851.
​Underneath the statue is a WW2 pillbox.
​ Read more about the statue 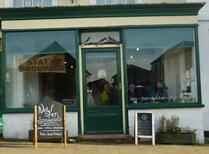 Parts of this property are very old. Inside is a large beam with Tudor-style carvings. There is a well, carved out of solid rock, under the front of the shop and a mediaeval street that led to Swan Lane, now blocked off, between it and 6 Market Place, the former Market Restaurant.
It has been a grocer’s shop (Liddiard's)and was the Tourist Information Centre until 2005, a florist’s, a delicatessen. 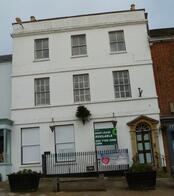 Originally two town houses; it became the County of Gloucester Bank when it moved from the Pump House.
In 1897 it became Lloyd’s Bank 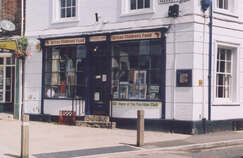 Another re-fronted building which hides an older interior. In the early 19th century it housed an open-fronted butcher's shop and in the late 19th century there was a chymist on the ground floor.
In the rooms above there was a solicitor who ran a postal lending library as a sideline. His son, Bernard Haines, also a solicitor, worked full-time until he died at the age of 92. He was, at one time, Britain's oldest practicing solicitor.
​Until 2005 it was the Cheltenham and Gloucester Building Society.

​A late 17th Century building, drastically altered in the 19th and early 20th Century.
It was once the home of Faringdon’s Printing Works who published the White Horse Gazette until the 1930s.
It has been a newsagent, owned first by WH Smith then privately. More recently it has been  a lifestyle and mobility specialist shop and a hardware shop. 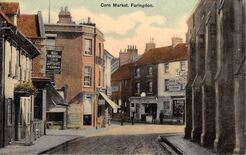 A stream which divided Faringdon into the tithings of Port to the East, hence Port Well, and Westbrook to the West, used to be forded at this point. The stream is now concealed in a culvert passing under the roadway and directly below the former Taylor’s fish shop.
In 1953 a company laying a telephone cable damaged the culvert. Then, before the bypass, traffic passing through the town was heavy with a Pressed Steel Fisher lorry transiting every two minutes between Swindon and Cowley. In order to repair the culvert without stopping the traffic the Ghurkas built a Bailey Bridge over the culvert in 18 hours. At first the bridge was too steep and the bus from Oxford got stuck, but the slope was reduced and the work was completed in a week.
On 26th May 1993, five inches of rain fell in 24 hours causing sand to be washed off Folly Hill that blocked the Corn Market.

​Built very early 18th century.
​In the mid 1800s, an egg collector and dealer lived there. Later it was part of the Eagle brewery, which was situated where Southampton St car park is now.  For many years, until 2019 it was a specialist cheese shop

Possibly mid 18th Century, formerly a jeweller’s, then in the 1960s an electrical shop.
The street clock was made by a Mr Counsell, a watch and clockmaker in the mid 1800s. See information about the clock
For many years this was the Nut Tree, a gift shop.

This building was was purpose built as Taylor’s fishmonger’s and was here from late 19th Century until 1999.
It has since had various uses including a bargain shop, a shoe shop, a coffee house, and toy shop.

​This is possibly the oldest pub in Faringdon. It started trading in the 14th Century and became a famous coaching inn with extensive stabling.
It is featured in the book Tom Brown’s Schooldays, by Thomas Hughes of Uffington, as the inn where the bully Flashman drank.

Until the comprehensive education system was introduced this was part of Faringdon Grammar School for Girls, and later Faringdon Comprehensive School. More recently it has been Faringdon Junior School.
Before this it was the home of Mr Dundas who gave the Cottage Hospital in Coxwell Road to Faringdon.

From 1948 until 1971, when the comprehensive system was introduced, this Grade 2 listed building was part of Faringdon Grammar School for Girls. It closed when Tollington School, now Faringdon Community College, on Fernham Rd was opened. Before then it was the home of Mr Dundas who gave the Cottage Hospital in Coxwell Road to Faringdon.
It is now the town library, with the history and other rooms upstairs.
The school buildings behind have become Faringdon Junior school. 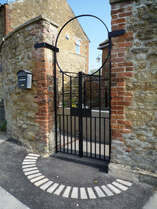 The building was started in 1672, and has been much changed since. see details 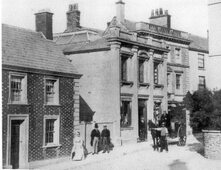 This Grade I listed Victorian building was built as a drapers shop in the 19th century (c 1850s).  It remained a draper until the mid 1970s. Since that it has been restaurants of varying types.
​

Cafe, Marlborough St
Located on Arthur’s Hill, named after H.N. Arthur who owned it. The three storey building at the top of Marlborough Street was originally a coach and harness makers, and has since been many different businesses: including an antiques centre, furniture store and now cafe.
​The road was levelled by cutting through the hill to make it easier for coaches and horses. 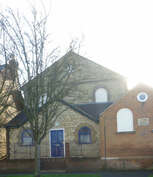 The Vale of White Horse Lodge has been in existence since 1878 and in 1974 it sponsored the formation of a daughter Lodge, the Ashdown Lodge.​

The Faringdon Masonic Centre remains within the Province of Berkshire, despite the fact it is, thanks to boundary changes in the 70’s, geographically in Oxfordshire.

​Faringdon station opened in 1864, terminus of the Faringdon Railway Company’s broad gauge branch line to Uffington  junction on the main London/Bristol track. It was converted to standard gauge in 1878 and bought by GWR in 1886. The Beeching plan closed the service to passengers in 1951 and finally to goods in 1963. 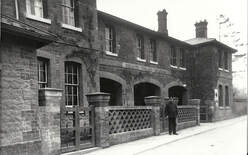 The Old Police Station, Coach Lane
​Dating from 19th century the police station used to have a courtroom, 2 cells and was in use until 1976. It is now residential accommodation.