History of the Clock in the Cornmarket, Faringdon 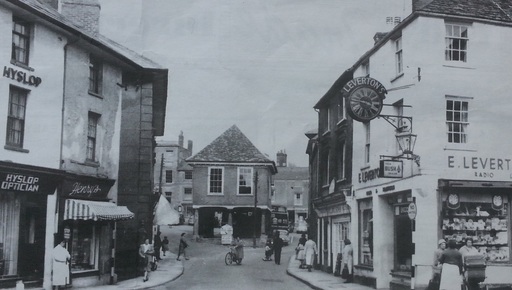 The original Cornmarket Clock is from the mid-19th century. It was made by Counsell Clockmakers who were based in Faringdon - and were still around (making very fancy carriage clocks by hand) well into the 20th century. It was of course mechanical; with an impressive weights cabinet on the 1st floor. These weights needed pulling up daily.

But it wasn’t just the weights that were inside the building. The visible “clock” that you see is in fact mostly an empty carcass. The actual mechanism was (and still is) safely tucked inside a cupboard, with link rods going to the lozenge-shaped carcass that are attached to the hour and minute hands.

We now jump to the 1930s. The building - #2 Cornmarket - was bought by Esser Leverton, a Jewish refugee from Russia who settled in Faringdon as he travelled the country with a horse and trap, repairing shoes. He decided to stay in Faringdon because he found the locals very warm and welcoming! The ground floor soon became the new shop: E. Leverton & Sons - selling radios and small electrical items, with the family living upstairs. Esser had three children: David, Sydney and Hettie. David mostly ran the shop; Sydney lives on in Faringdon through his son Graham – now in his 80s; and Hettie married Reg Hawes, the town’s policeman and a world war I veteran. It was David (the grandfather of the current owners – Tony and Danny Bleetman) who had the family name of LEVERTON'S added to the top of the clock. According to David’s daughter Rosalie Bleetman (nee Leverton), it’s quite likely that he also had Counsell rebuild the mechanism. This all happened before WWII.

Rosalie remembers that before the bypass was built in 1978/79, the clock ( and the Leverton name sign) were continually being damaged by high vehicles as they tried to squeeze through the narrow Cornmarket. You can imagine that these knocks and bangs led to high maintenance, not just to the carcass, but also to the link rods. On one of these occasions the Leverton's name was knocked off for the umpteenth time, and wasn't put back. Hairline cracks would lead to water ingress. We can all remember the times when the clock stood still - waiting to be repaired - yet again.

In 2010, Trevor & Donald at the Nut Tree were still pulling up the heavy weights daily. But it was clear that the mechanical clock was not only hard work, and could also do with a bit of help from modern technology. So, the clockmaker (Peter Meecham from Milton-under-Wychwood) was brought in to replace the original Counsell mechanism with an entirely new mains-powered unit. Since 2010, it's been a satellite-controlled electronic unit  - but it still uses the same link rods to move the hands. The latest visit to Peter Meecham's was in 2015 and was purely cosmetic. A full face-lift, including new gold leaf gilding – came at a cost of well over £2000.

You’d think that a satellite-controlled clock can’t show the wrong time, but towards the end of 2018 our Cornmarket Clock managed to defy the odds by running consistently 15 minutes fast. On this occasion, due to challenging access and advancing age, Peter Meecham wasn’t able to help. Then soon after this covid struck, and finding another clockmaker with the necessary skills was simply not on the cards. It wasn’t until 2022 that Wim Van Klaveren, a renowned clock restorer fortunately not living too far away (see https://clockconservator.com/ )  was brought in to fix the problem. Would Wim, with a lifetime of extensive clock-restoring experience, be able to get our clock to behave itself?

Wim ascertained that the electronic mechanism was fine. He and Tony (one of the current owners and great-grandson of Esser) went to a garden centre, bought a bamboo pole and screwed a hook into the end of it. Wim then leant out of the window and pulled the hands back into the correct position. It seems to have worked. They then drove to Peter Meecham’s house and picked up the original Counsell clock mechanism which Wim is now going to restore and make a new clock to display inside #2 Cornmarket. We are very grateful to the Bleetman-Leverton family for continuing to support and uphold this interesting piece of Faringdon’s heritage.

And - after four long years of running fifteen minutes fast, our splendid Cornmarket Clock is again showing the correct time. The bamboo pole with the hook is standing by, should it again be needed.
Sjoerd Vogt
Dec - 2022 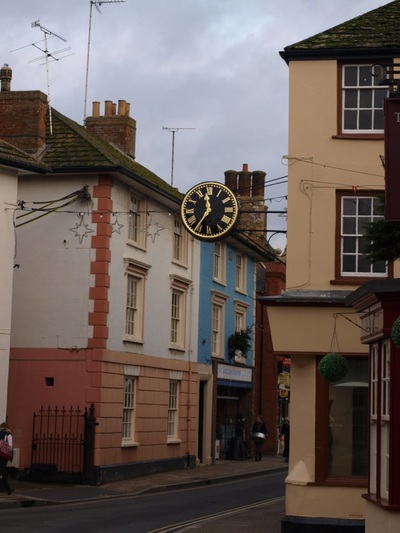 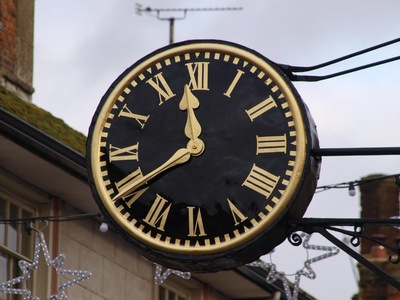 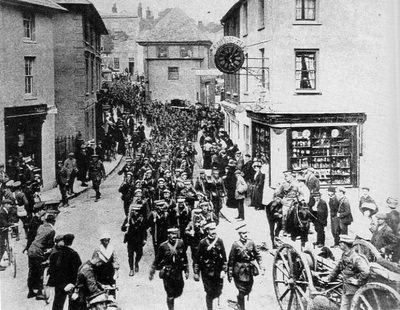