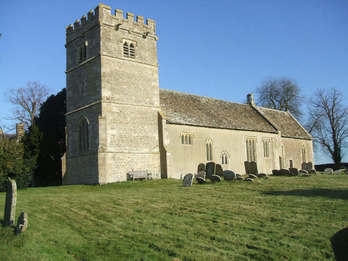 St Giles Church
The parish church of St Giles, Great Coxwell standing in its award- winning churchyard on a ridge above the village at the opposite end to the celebrated Great Barn, is one of the landmarks of the Vale of the White Horse. Perched on its hilltop across the fields, it is one of the few churches that can be seen from the busy A420 between Swindon and Oxford. The church has stood here since soon after the Norman Conquest. Parts of this earlier church can be seen in the present building. The walls of the nave, almost two feet thick, probably belong to the Norman church, as do the two narrow widows with their deep splayed embrasures high on the North wall.

In the early 13th century, the village of Great Coxwell and its parish church were given to the Cistercian Abbey which King John had founded in 1204 at Beaulieu in Hampshire. The Cistercian monks established a grange at Great Coxwell, staffed by lay brothers who farmed the land of what was one of Beaulieu Abbey’s greatest estates. The Great Barn at Great Coxwell was built by the White Monks (so-called from their unbleached woollen habits) to store the produce from this vast estate. Here, by recent custom, on Christmas Eve a crib is set up and the congregation gathers to sing carols and bless the crib before wending their way in a candlelit procession down the village street singing ‘O Come all ye Faithful’ to midnight mass in the village church. The monks did not serve the church themselves: that would have been against their Rule. To this day, the priest in charge of the parish church is known as the vicar, a title first given to his mediaeval predecessors who held the church on behalf of the monks. The dedication, an unusual one in rural areas, of the church of St Giles, a legendary hermit of the Dark Ages and patron saint of the disabled and the homeless, may perhaps be due to the influence of the monks who modelled their life on the way of life of the hermits.

The Feast of St Giles falls on 1st September, which may be a clue to the time of year when the building was completed and paid for. Each year, on the Sunday nearest St Giles Day, the congregation gathers at the Great Barn round the pool from which the village probably takes its name (Cogges Well) to bless the spring and to remember our village forbears before the processing through the village to the church for a service in honour of St Giles

The first abbey churches of the Cistercian monks were, like the Great Barn, plain functional buildings and the same may be said of the church that the White Monks owned in Great Coxwell.
The arch separating the nave from the chancel is simple Early English work of the 13th century. In the south wall of the nave, just west of where the south door originally was, is a large window, with a deeply splayed embrasure, simple decoration and two primitive human faces. Behind the pulpit, in the southeast corner of the nave is what remains of the spiral staircase which once led up a wooden walkway, running across the front chancel arch. Called the rood loft or rood screen, from the rood or crucifix, which surmounted it, it was here that the story of Christ’s Passion would have been sung by the vicar at the beginning of Holy Week. For perhaps a century or more, the church was without a tower. The tower which now catches the motorist’s eye across the fields was not added until the early 14th century. It is decorated with strange, sometimes grotesque, figures and creatures- a man being swallowed by a monster, a sow with suckling, a lamb(references to the two animals for which this Berkshire estate of the Cistercians was famous), the head of a king, much eroded by the winter storms which lash the ridge on which the church stands. An empty niche on the north side of the tower perhaps marks the place where a statue of St Giles once stood. At present, the bells of St Giles hang silent. They are in too dangerous a state to be rung. At the eastern end of the nave roof is a rare survival, the bellcote which once housed the sanctus bell, rung to call the workers in the fields to pause and say a prayer because the priest at the altar was at that moment elevating the Blessed Sacrament.

The 14th century nail-studded wooden door is still unlocked every morning and the church stands open every day for prayer. The memorial brasses of Thomas Morys and his wife, who were tenants here of the White Monks in the years just before the Reformation, have been taken up from the floor and positioned against the south wall. In the reign of Henry VIII, the Abbey of Beaulieu was dissolved and the monks dispersed, some to monasteries abroad, some to marry and become parish priests under the new order. The ownership of Great Coxwell, its great Barn and the parish church soon passed now into lay hands. The rood screen was dismantled and its stairs blocked upThestatue of St Giles was taken down from its niche in the tower.

In the 17th century a prettily carved pulpit was instated, a reminder that where once the high point of worship of the faithful had been elevation of the Blessed Sacrament. Now it was lengthy sermons. The words ‘Jesu mercy’ scratched on the door jamb in 16th century letters may be a reminder of the pain which many experienced during these changing times when the Jesuit priest Edmund Campion said mass in secret for the recusant Morys family in the Court House beside the Great Barn before going on to nearby Lyford, there to be betrayed, and arrested, leading to his trial and martyr’s death.

In the 18th century the chancel was extensively refashioned, leaving only the priest’s door on the south side, and the piscina or stone basin where the sacred vessels were washed, as survivals of the mediaeval chancel. For two hundred years, people have knelt at the wooden communion rails, possibly the work of a local craftsman, to receive the sacrament. But what, we may wonder, was the purpose of the curious wooden hatch in one of the windows on the south side above a stone window seat?

Outside in the churchyard, looking towards White Horse Hill, the 17th and 18th century gravestones lean haphazardly. Here the village forbears sleep, lying in family groups.

The old churchyard is closed now and is managed as a wildlife area. In 1997, the St Giles Churchyard Conservation scheme received an award from the Berkshire, Buckinghamshire and Oxfordshire Naturalists Trust in conjunction with the Diocese of Oxford. Here grow, naturally, over one hundred species, such as the rare wild clary, as well as the more common field scabious, oxeye daisy, quaking grass, birdsfoot trefoil and burnet saxifrage, while under the trees along the church boundary woodland plants such as primroses, violets, bluebells, wood anemones, and celandines can be found. At least nineteen species of British butterfly have been seen in the churchyard, among them the Holly Blue, Orange Tip, Gatekeeper, Small Copper, Large and Small Skipper. A new burial ground has been established outside the wall of the old churchyard. This small parish church of St Giles has no pretensions to being one of the great English Churches. But it is a place, in T S Elliot’s words, where prayer has been valid. Prayers have been said here and God has been worshipped continuously in this church for almost a millennium.
In the words of Philip Larkin: A serious house on serious earth it is In whose blent air all our compulsions meet Are recognised, and robed as destinies.
Earlier in the same poem Larkin wrote: I wonder who Will be the last, the very last, to seek This place for what its was;
We need to ensure that the continuities in the human spiritual quest which this simple parish church has stood for over a millennium now ending will speak to those who come after us.
Here, the intersection of the timeless moment is England and nowhere.
Let it not be said of us that we are the last, the very last to seek this place for what it was.