Coaching Inns in Faringdon
​Under construction 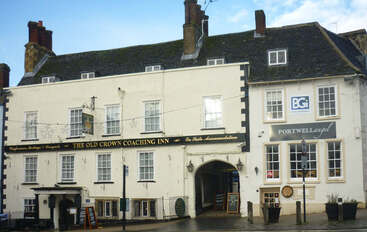 Crown Hotel
A Grade 2 listed, 16C coaching inn, refronted in Georgian times. There is a cobbled courtyard from which there is a fine example of an Elizabethan external stairway, called the Judge’s Staircase, one of only two such remaining in England. This gave access to Manorial Courts which sat in the
courtroom on the first floor. It is said that Judge Jeffreys held a court here after the Monmouth Rebellion, in 1685, when he hanged four or five local residents.

The County Court held monthly sessions here until they moved to the Court in the Police Station on Coach Lane. It was also used an Excise Office. A tunnel leading off towards the church from the cellars, and then to Wadley Manor, enabled Royalist soldiers in the Civil War to move in safety. The garages and storerooms at the rear were once stables. The stained glass window in the downstairs bar is probably of 14th Century glass and features a Lancastrian red rose which predates the Battle of Bosworth in 1485 (after which the Yorkist and Lancastrian houses merged under the Tudors). Some other windows have the emblem of Queen Eleanor of Castile (widow of Edward I) who died in 1214.

​Before the Civil War, England had no standing army and men were pressed into service. In 1640, there was an incident in the Crown when pressed men from Dorset sought out a Lieutenant Mohun for striking off the hand of a drummer boy who had threatened him and whom they believed had died as a result. The mob found Mohun and his fellow officers in the Crown; he tried to escape by climbing out of an upstairs window and clinging to the pole of the inn sign; but they poked him off with an 18 foot pike. He was then half drowned in an open sewer (now culverted under Cornmarket) but he survived. Unfortunately, a boy saw him climb out and told the Dorsetmen who then beat him to death. A hue and cry ensued and five Dorsetmen were hanged in Abingdon for the crime. 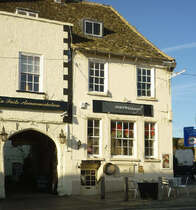 The Crown and adjacent premises are all that’s left of Faringdon’s pre-Civil War buildings. The Angel Inn, on the Market Place, was once part of the Crown Hotel and used by coachmen and stable lads whilst their masters took their refreshments at the Crown.

Until the 1920s it was the Angel Pub; more recently it was a hotel, then a restaurant with a wine bar in the cellar.

In the 19C the front of the building, next to the Crown, was Faringdon’s first post office and telegraph office.

​To indicate to the various stage coaches that there was mail to collect, there was a tall post with three different coloured, semaphore-type arms attached to the top operated by wires from inside the Post Office ​ 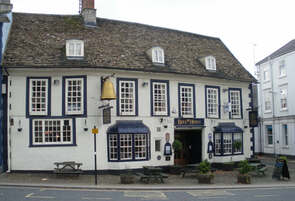 The Bell Hotel
This was a coaching inn where the Cistercian monks ran a hospice in the 12th and 13th Centuries. It was refronted in the late 17th Century when it was a famous coaching inn.

There are traces of a tunnel from the Bell leading towards the church. A stone mullioned window looking onto what is now the Quad, formerly Barclays Bank, is thought to be Tudor.

This is possibly the oldest pub in Faringdon. It started trading in the 14th Century and became a famous coaching inn with extensive stabling.
It is featured in the book Tom Brown’s Schooldays, by Thomas Hughes of Uffington, as the inn where the bully Flashman drank. 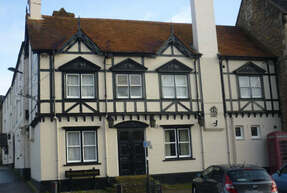 Salutation Inn ( now Salutation Mansions)
Formerly known as the Salutation Inn, it was built on the site of the monks’ lodging house, which dated from when the Cistercian Order was given the Manor of Faringdon by King John in 1203.

​It is thought to be the site of a hunting lodge used by King Alfred the Great and his son Edward the Elder who succeeded him in 901. Edward later became the first Saxon King of England. It is mistakenly said that he died in Faringdon but this a misreading of Farndon-on-Dee where he died leading an army against a Welsh-Mercian rebellion, on 17 July 924.
​
The new 1890’s frontage was built on the site of an Elizabethan property last occupied by Mr Pettifer, a builder. It was a coaching inn and extended from the Market Place to Church Street.
​It was re-fronted in the 19th century and in recent years has been converted to flats. ​