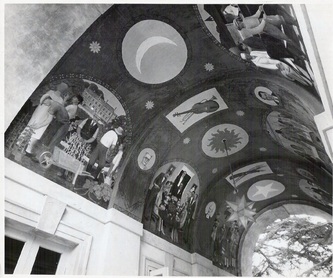 Frescos commissioned for the exterior of Buscot Park’s little theatre between 1936-7 were painted by Francis John Clarence Westenra Plantagenet Hastings, 16th Earl of Huntingdon, known as Viscount Hastings until 1939. Friends called him “Jack”. The images contain some subtle in-jokes, possibly inspired by the presence of Lord Berners, who appears twice here.

Four roundels show portraits of the artist Viscount Hastings, Lord Berners, Susan Lawrence M.P. (the first woman on the Labour Party committee) and Frank W. Bourne, Lord Faringdon’s secretary who he nominated as Labour candidate for Abingdon – a seat Gavin’s family had previously held for the Conservatives for generations. Actions like this led to him being dubbed "The Red Peer" by some sections of the press.

The frescoes have faded but originally looked like a Mexican chapel, with a blazing sun, crescent moon, musical instruments and writing tools on the vault above.  Scenes painted on the walls below were framed in a folk-art style decorative pattern with stars and fretwork so that the whole might have resembled a reredos showing saints in a chapel, in spite of the fact that Lord Fraingdon was an atheist.

Lord Berners' genial personality and wit had an inspirational effect on creative people. In 1926 he had met the young Rex Whistler who was studying painting in Rome. He introduced Rex to the finest things Italy had to offer - food and wine as well as scenery, Art and architecture. Whilst he was homosexual, Rex reported that there was no hint of his being other than a gennerous and highly civilized mentor. Whistler was later to paint some affectionate and amusing portraits of him at Port Lympne, the home of the politician and art collector Sir Philip Sassoon.

In 1931 the 20 yr old Robert Heber-Percy became Lord Berners’ companion.  In spite of the 27 yr age gap between the two, their high spirits and whimsy became legendary, not only because of the Faringdon Folly and the dyed pigeons leaving a confetti of feathers on the lawn of Faringdon House. In 1937 Berners wrote to his friend the composer Igor Stravinsky to thank his mistress, Vera Sudeikina, for ‘having sent the colours for the pigeons. They are magnificent and add a tropical touch to this wintry country.’ Later, he thanked her again for sending edible dye that let him to serve ‘blue mayonnaise to my guests.’

Gavin Henderson (the 2nd Lord Faringdon from 1934-77) was their neighbour at Buscot Park four miles away. Both peers were aesthetes with friends in common, but Gavin’s were often more political.

Click the pictures to see a larger version
Those wishing to see the frescoes at Buscot Park can do so by visiting on one of the many open days between April and September. They offer a glimpse of a topsy-turvy age when Peers became Socialists and Socialists became Peers. They also preserve something of the life-enhancing humour, which was Lord Berners’ great gift to his friends. Buscot Park, of course, survived its Socialist peer precisely because he took steps to ensure that the public would enjoy the Faringdon's Art collection, Palladian house and pleasure gardens in the future. His nephew Lord Charles has honored that wish by completing projects his uncle began, as well as adding his own.